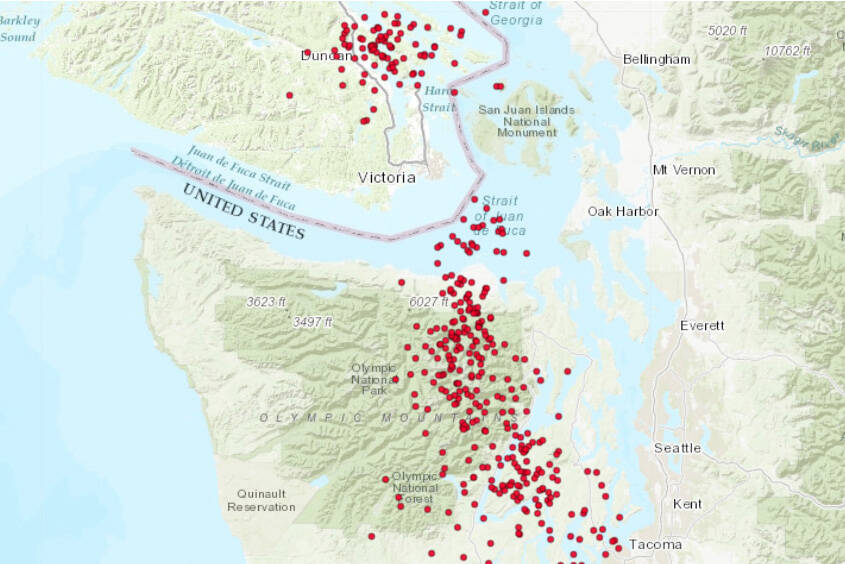 More than 2,000 tiny tremors recorded in the south Island and Puget Sound area may mean a small move to the west for Vancouver Island.

It’s too soon to tell, but likely they’re an indicator of “episodic tremor and slip,” said John Cassidy, an earthquake seismologist with Natural Resources Canada. His research involves all aspects of earthquake hazard studies to help mitigate the impact of future earthquakes in Canada.

It’s not uncommon for the little bursts to happen with hundreds of tremors but the episodic tremor and slip (ETS) events happen about every 14 months and include a little tectonic movement. Puget Sound is on track for an ETS, with the last in October 2020. Southern Vancouver Island had one in February.

ETSs were discovered a decade ago, through global positioning data, Cassidy said when researchers noted that at the same time as a large number of tremors, the plate beneath the region shifts a few millimetres – the thickness of five dimes – to the west over the course of a week or two.

“It’s really tiny and it’s really slow but it’s remarkable we can see this with our instruments,” Cassidy said.

Within the week researchers should have confirmation if this is an ETS event.

“At this point, it looks like one, it has all the characteristics, but we’ll be looking for this subtle slip,” Cassidy said.

Questions remain about the events themselves – for example, the cause and where the energy is coming from – but they serve as solid reminders about life on the coast, Cassidy said.

This is an active subduction zone. Residents should be ready.

“It’s easy to forget about earthquakes and what to do, so just practising that on a regular basis is good,” Cassidy said. The Great B.C. ShakeOut (shakeoutbc.ca), held the third Thursday in October each year, is geared to exactly that.

Damaging earthquakes occur every decade or so and magnitude nine earthquakes happen offshore four to six centuries apart, Cassidy said. The last known was Jan. 26, 1700. That date comes from written records of a tsunami that hit Japan at the time. Researchers derived the time and place of the original earthquake from wave heights and arrival times noted in Japan. Local Indigenous oral traditions also describe exactly what would be expected in one of those earthquakes – on a winter’s night, before settlers arrived.

He suggests the Capital Regional District’s website, crd.bc.ca/prepare-yourself, for resources across Greater Victoria and practical, simple advice that can make a difference after an earthquake.

Black Press Media also produced a resource guide for local residents. It is available online at vicnews.com under e-editions.